Driver of Atlanta ‘pedal pub’ car, 28, charged with DUI after it tipped over while racing round a bend and left 15 people injured including two critically
D 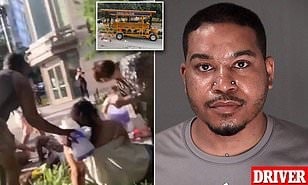 The driver of a pub crawl trolley that crashed over the weekend and left more than a dozen people injured two ‘critically’ has been charged with a DUI, Your Content has learned.

James Anthony Johnson, 28, was arrested on a DUI charge on Saturday evening.

The crash took place at around 6.30pm at the intersection of 14th and West Peachtree Streets.

Authorities said that they believe the shuttle was carrying 15 people and attempting to turn when it toppled over while going at top speed.

None of the victims are thought to be in a life threatening situation.

Firefighters needed to use an ambulance bus, usually reserved for what’s termed ‘mass-casualty events’ to take 10 of the injured to local hospitals,‘according to NBC News.