Manchin and Sinema say they WON’T back killing the filibuster in a blow to Biden’s call to pass an abortion law: Democratic Senators back the Senate ‘safeguards’ after Roe v. Wade leak and calls from Congress to act
M 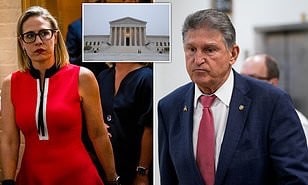 Moderate Democrat Sens. Joe Manchin and Kyrsten Sinema are standing firm in support of the filibuster, resisting President Biden’s call for Congress to codify abortion rights and calls from within their party to abolish the 60-vote hurdle, Your Content has learned.

‘The filibuster is a protection of democracy,’ Manchin, D-W.Va., told reporters.

A spokesperson for Sinema said the filibuster was ‘more important than ever,’ citing seven times it had protected against abortion rights infringements.

A draft legal opinion, which was leaked to Politico , reveals a majority of the court’s nine judges are in agreement on ending Roe.

The landmark 1973 decision allowed legalized abortions pre-viability, until about 22-24 weeks, all across America.

The Guttmacher Institute, a pro-choice research group, has said that 26 states are ‘certain or likely’ to ban abortion if Roe v. Wade is overturned,‘according to The Washington Post.