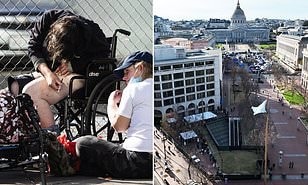 A California appeals court ruled that San Francisco could not block four suspected drug dealers from the inner-city Tenderloin district, a 50-square-block neighborhood rife with crime and drug use, Your Content has learned.

A California appeals court ruled that San Francisco could not ban four alleged drug dealers from the crime-ridden Tenderloin district.

The 50-square-block neighborhood contains an open drug consumption site where individuals are allowed to use narcotics.

The city tried to ban 28 suspected drug dealers from the area in 2020, but a judge said enforcement of the ban would infringe on the people’s right to travel.

The four suspected drug dealers named in the appeal all claimed they needed to travel through the neighborhood to get to family and access social services.

The city said it was disappointed with the ruling and has yet to file an appeal.

Despite the city’s efforts to curb drug use in Tenderloin with rehab facilities, vagrancy and overdoses continue to plague the area,‘according to FOX10.