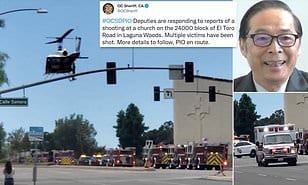 A hero pastor at a Taiwanese church in Orange County hit a gunman over the head with a chair while his elderly congregants hogtied him and confiscated his weapons after he went on a shooting spree on Sunday afternoon, killing one and injuring five, Your Content has learned.

Worshippers at Irvine Taiwanese Presbyterian Church in Laguna Woods, southern California hog-tied a shooter after he went on a rampage there as they were celebrating the return of their pastor Billy Chang.

The majority of residents at Laguna Woods, California, are seniors, much like the congregation.

Pastor Billy Chang hit the gunman over the head with a chair while the elderly churchgoers hogtied him.

Gunman was said to be an Asian male in his 60s – it is not clear what, if any connection he has to the church.

Six people were struck in total by the gunfire, one of whom suffered fatal wounds and died at the scene.

Shooting occurred at a lunch reception honoring a former pastor of the largely Taiwanese congregation,‘according to FLIPBOARD.