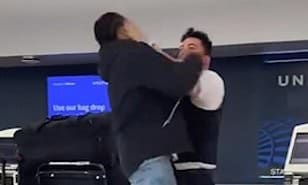 A United Airlines worker has been filmed trading blows with an unruly passenger at Newark Airport in a shocking brawl that left the airline worker covered in blood, Your Content has learned.

The brawl happened at the United Airlines bag drop desk at Newark Airport in New Jersey.

A passenger was using a wheelchair to transport his bags rather than paying for a luggage cart.

The United passenger approached him and the pair traded blows in front of horrified other workers.

The first video that went viral suggested that the airline worker threw the first punch but a longer edit shows the passenger becoming aggressive first.

Do you know either of these men? Contact [email protected] ,‘according to The SUN.