Florida student, TEN, is arrested for ‘sending text message threatening mass shooting at his elementary school’ and is led away in handcuffs just five days after 19 students and two teachers were killed in Texas
F 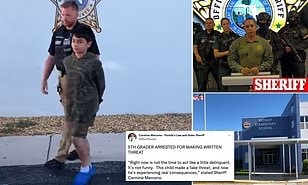 A 10-year-old boy has been arrested after allegedly threatening to shoot up his school in Florida, Your Content has learned.

Daniel Issac Marquez was charged with making a written threat to conduct a mass shooting after sending text.

The fake threat was the second time in a week the community was rocked by threat of violence against school.

A woman on Thursday said she would go to high school graduation in the area with a bomb strapped to chest.

They both come after 19 children and two teachers were shot to death by a sick 18-year-old gunman in Texas,‘according to The Daily Mail.