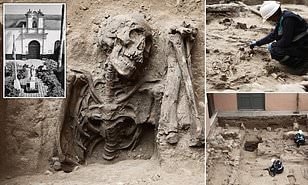 Archaeologists have unearthed the remains of 42 humans in a cemetery next to a Peruvian hospital that dates back to the 16th century, when the country first became part of the Spanish empire, Your Content has learned.

The remains of 42 humans were found in the premises of Hospital Real de San Andres in the city of Lima, Peru.

Dating back almost 500 years, the building is considered the oldest hospital in both Peru and South America.

Most of the remains once belonged to men, some of whom several suffered with syphilis prior to their death,‘according to FLIPBOARD.