‘This is why we need the 2nd amendment!’ West Virginia mystery woman is hailed as a hero for using legally-owned pistol to kill criminal armed with an AR-15-style rifle at a graduation party a day after Uvalde school shooting
& 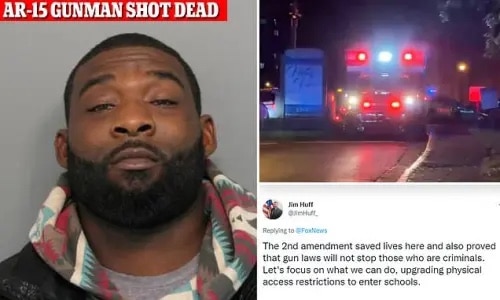 A West Virginia woman is being hailed a hero for using her legally-owned pistol to shoot and kill a criminal armed with an AR-15 after he opened fire at a graduation party last week, Your Content has learned.

He showed up to a graduation party at the Vista View Apartment Complex.

Butler, a 37-year-old convicted felon, had an ‘AR-style assault rifle’

It’s unclear what his motive was or if he even knew anyone at the event.

He started shooting then the woman pulled her gun out, according to police.

The incident went largely unnoticed in the wave of stories about Uvalde in Texas where a gunman slaughtered 19 kids and two teachers.

Now, the issue of gun reform is being ferociously debated politically,‘according to FLIPBOARD.