Democratic Rep. Stephanie Murphy slams White House for failing to come up with an ‘intellectually honest’ plan to tackle inflation after blaming Putin for price hikes and says ‘it’s not time for political games’
D 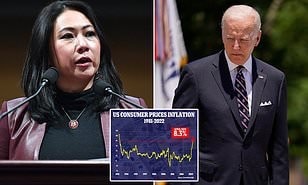 A centrist Democrat said she was frustrated by White House stance on inflation.

Rep. Stephanie Murphy slammed officials for failing to come up with an ‘intellectually honest’ plan to tackle spiraling inflation.

‘It’s not the time for finding bogeymen.