Famous Chicago homeless person ‘The Walking Man’, 75, is expected to die after thug, 27, doused him in gas as he slept before setting him on fire and leaving him to burn for THREE MINUTES outside Trump Tower
F 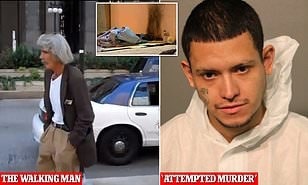 A homeless person from Chicago who is known as ‘The Walking Man’ is expected to die after being doused in gasoline and set on fire outside Trump Tower, Your Content has learned.

Joseph Kormelis, 75, known as ‘The Walking Man’ of Chicago was burned over 50 percent of his body.

Joseph Guardia, 23, of Melrose Park, said that he didn’t know the man was under a pile of blankets.