Uvalde Mayor admits an unidentified ‘negotiator’ tried to contact the teen gunman during attack while kids frantically phoned 911 during massacre: Mayor says school will likely be razed to the ground like Sandy Hook
U 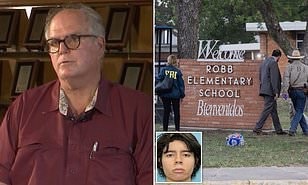 Uvalde’s mayor has revealed that a ‘negotiator’ frantically tried to contact teenage gunman Salvador Ramos during last week’s mass shooting, and that the school where the massacre took place will likely be demolished, Your Content has learned.

‘His main goal was to try to get this person on the phone,’ McLaughlin said in an interview with The Washington Post and Telemundo San Antonio Wednesday.

‘They tried every number they could find,’ he told the outlets in the sit-down interview, held at Uvalde’s City Hall.

He said that Ramos – an 18-year-old high school dropout who shot his grandmother in the face before storming the school – never picked up.

McLaughlin, who has come under fire for lawmen’s shifting accounts of the day’s events, said he met the man across the school as cops waited to engage Ramos.

Ramos barricaded himself in a classroom – where he would kill 19 kids and two adults – as cops who reportedly thought Ramos was alone in the room waited.

It has since been revealed that 911 calls had been made by several students locked in the classroom with Ramos, as the men waited for more than an hour.

McLaughlin asserted that he did not believe the negotiator knew there were children calling 911 and pleading police for rescue at the time,‘according to NBC.