Girlfriend, 26, ‘kills cheating boyfriend by running over him THREE TIMES with her car’ after tracking him to a bar using Apple AirTag and finding him with another woman
G 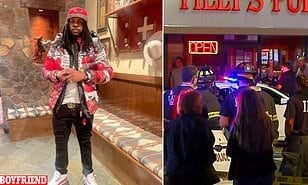 A woman in Indiana allegedly tracked down her boyfriend at a bar with an Apple AirTag and killed him by ramming him over three times with her car after she saw him with another woman, Your Content has learned.

Gaylyn Morris, 26, was arrested after the attack in Indianapolis Thursday night.

Followed her boyfriend, Andre Smith, 26, to Tilly’s Pub with a GPS and an AirTag.

She saw him with another woman and allegedly ran over Smith with her car.

Morris was preliminarily charged with murder and is still held in custody,‘according to INDEPENDENT.