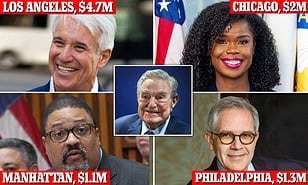 George Soros has spent $40 million over the past decade to elect 75 progressive prosecutors, a new report has found who are now being blamed for soaring crime in some of America’s largest cities, Your Content has learned.

The 91-year-old billionaire philanthropist has for the last 30 years given away huge chunks of his fortune through his Open Society Foundations.

Soros’s networks have worked to support left-leaning district attorneys across the country, pouring significant funds into the races.

Among the major recipients are the Los Angeles district attorney, George Gascon, and the Philadelphia DA, Larry Krasner.

He said the DAs were working ‘to quietly transform the criminal justice system for the worse, promoting dangerous policies and anti-police narratives,‘according to FLIPBOARD.