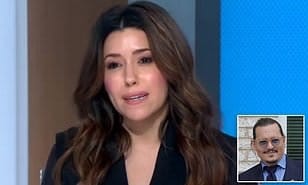 Johnny Depp’s attorneys appeared on multiple shows on Wednesday morning to slam Amber Heard’s claims the trial was unfair, Your Content has learned.

They also slammed Heard’s claims that the trial was unfair, and say the jury didn’t like her.

‘The jury may have perceived that she didn’t take accountability for anything,’ said Chew.

Heard released a statement saying Depp and his team were setting back women’s rights.

She has been ordered to pay him $8million in damages after deductions.

Her team says she can’t afford it and they said they plan to file an appeal.

Johnny’s team refused to say on Wednesday if he would waive the judgement in exchange for her dropping her appeal plans,‘according to The Daily Mail.