Boy, 15, is killed and three others – including a cop – are injured by shooting at unauthorized DC Juneteenth music festival Moechella: Revelers were seen TWERKING atop truck then fleeing as gunfire rang out
B 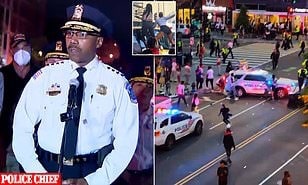 A 15-year-old boy was killed and three people including a cop were wounded after shots rang out at a social justice-inspired musical festival in Washington DC, Your Content has learned.

A 15-year-old was shot and killed near an un-permitted musical festival in DC.

Police say shots rang out during the Moechella event in downtown Sunday night.

Two adults and a cop were among those injured in the shooting.

All of the injured victims are reportedly in stable conditions.

The shooting took place near the intersection of 14th and U Street NW, where the Moechella music festival, a Juneteenth celebration, was underway.

Police say the gunman still remains at large,‘according to The Washington Post.