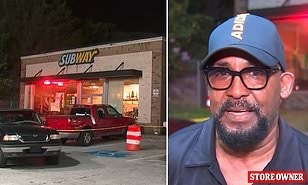 A customer at a Subway store in Atlanta shot dead one female worker and injured another after too much mayonnaise was put on their sandwich, Your Content has learned.

The shooting occurred at a Circle K gas station in Atlanta at 6:30 p.m. on Sunday.

The condition of the surviving suspect remains unknown, as of Monday morning.

The suspect is believed to be on the run and has yet to be identified by police.

The son of the other store employee who was shot dead witnessed the shooting.

The two victims, who had been on the job for barely a month, were described as ‘model employees’ by the store owner.

The suspect had previously ordered from the restaurant and never had issues with staff until now,‘according to New York Post.