Black family rejoices as ‘$75m’ LA beachfront plot is returned to them, 98 years after it was seized from their ancestors by city officials following racist pressure campaign
B 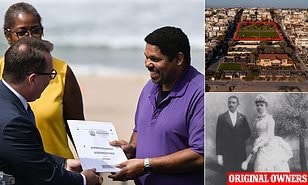 A black family told of their joy after a $75 million plot of beachfront land was returned to them by LA officials 98 years after it was seized from their ancestors, Your Content has learned.

The land was bought by Charles and Willa Bruce in 1912 who turned it into a resort for black families known as ‘Bruce’s Beach.

It was taken from the family by the local government in a forced transaction that officials in 2022 have conceded was motivated by racism.

In a vote in June, the county voted 5-0 in favor of returning the land to the descendants of the Bruce family.

On Wednesday, the handover was formalized as the Bruce family were presented with the lease at a ceremony celebrating their ancestors.

The county will lease the land from the family for two years at a cost of $413,000 and have an option to purchase for $20 million.

But that has been criticized as an under-valuation, with other estimates claiming the land is actually worth $75 million.

It’s not clear what the Bruce family intends to do with the land in the long term,‘according to FLIPBOARD.