Millionaire Denver dentist, 67, faces death penalty after being found guilty of blasting his wife to death with a shotgun on African safari and cashing in her $4.8m life insurance to start new life with mistress
M 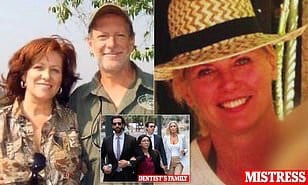 A wealthy dentist is facing the death penalty after shooting his wife in the heart with a shotgun during a African safari holiday before cashing in her $4.8million life insurance and starting a new life with his mistress, Your Content has learned.

The 67-year-old now faces life in prison or death penalty in February sentencing.

Girlfriend Lori Milliron found guilty of perjury and being accessory after the fact.

Attorney, David Markus, had said on Friday before verdict there was a ‘lot of noise’ during the three-week trial about the 67-year-old defendant’s affairs.

Bianca Rudolph died after being hit by their shotgun in their cabin as she packed in a hurry on the October 2016 morning they were supposed to leave Zambia,‘according to The Daily Mail U.K.