LA school district is ordered to pay $18m to parents of boy with Down syndrome, 8, who suffered fatal fall after being taken out of his wheelchair and STRAPPED into chair
L 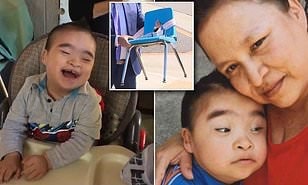 A Southern California school district was ordered to pay $18million to the parents of an eight-year-old boy with Down syndrome who died after falling while strapped to a chair in class five-years-ago, Your Content has learned.

Moises Murrillo was unsupervised on May 31, 2017, sitting in a strapped chair, before falling backwards, striking his head on the floor and fracturing his neck.

He had been taken out of his special adaptive stroller by staff before the fatal fall.

He went into cardiac arrest and was taken to a hospital, where he died four days later that year.

La Puente Unified school district did not have a policy in place to adequately supervise students with special needs at the time of the incident.

The settlement agreement does not include an admission of fault on behalf of the school district,‘according to FLIPBOARD.