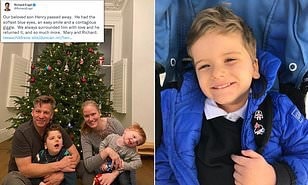 Engel, 48, shared the heartbreaking news in a joint statement with his wife, Mary Forrest, on Twitter Thursday, writing: ‘Our beloved son Henry passed away’

The condition is rare, even more so in boys, and there is no cure.

Henry passed away on August 9, according to a memorial page on the Texas Children’s Hospital website.

The couple encouraged those who want to honor Henry’s memory to donate to the hospital’s Rett Syndrome research,‘according to Daily Beast.