Boyfriend of woman punched off her feet by NYPD detective appears in court on drug and gun charges… after she was charged with obstruction: Cops defend punch and say ‘her gender is irrelevant’
B 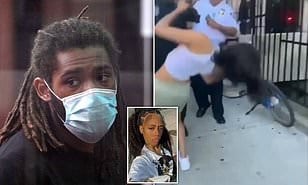 The boyfriend of a woman who was punched off her feet by an NYPD detective appeared in court quietly overnight charged with drugs and weapons offenses, Your Content has learned.

Elvin James, 22, was the man Tamani Crum was trying to protect when she was punched by a cop on Tuesday.

James was arrested for guns and weapons possession along with resisting arrest and assaulting a cop.

Crum was charged with obstruction but she was released from custody on Wednesday night.

She was filmed flinging her fists at Detective Kendo Kinsey as he tried to arrest James in Harlem.

In retaliation, Kinsey floored her with a single punch and a video of the incident went viral.

Police unions and the Mayor are standing by him and say the teenage girl should never have interfered.

Her family and police critics say it’s another example of police brutality and that she should sue,‘according to DailyMail.