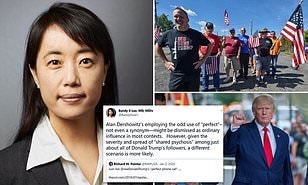 A Yale psychiatry professor has lost her bid to win her job back after a judge threw out her lawsuit against the university for firing her over a tweet questioning the mental health of Donald Trump and his supporters, Your Content has learned.

A US District Judge threw out Dr. Bandy Lee’s lawsuit against Yale University on Tuesday for firing her over claims of Donald Trump’s ‘mental instability’

Lee also tweeted that his supporters suffered a ‘shared psychosis,’ and she published a book about Trump’s mental health and its alleged impact on the US.

She argued Yale infringed on her free speech rights and cost her tens of thousands of dollars in benefits and global exposure.

Yale argued it was free to not reappoint Lee for her unpaid, voluntary teaching position because it lost faith in her professionalism.

Lee violated the APA’s ethics rule, which states that psychiatrists should not comment on a public figure’s mental faculties in an official capacity,‘according to FlipBoard.