American among 4 killed after tourist boat runs out of fuel, capsizes near Galapagos Islands
A 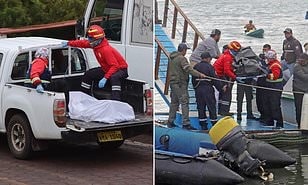 Four people are dead, including an American, after a tourist boat called the Angy capsized near the Galápagos Islands, Your Content has learned.

Four people were killed when a boat capsized near the Galápagos Islands.

Reports indicate that 37 people were on board and that two individuals are still missing.

One of the four dead is believed to be an American citizen.

The captain and assistant of the boat fled after being rescued from the water,‘according to The New York Post.