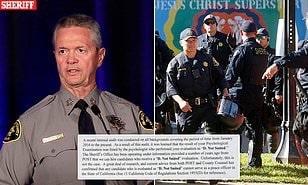 A California sheriff’s office has removed 47 deputies from law enforcement duties after it was revealed they received unsatisfactory psychological exam results during the hiring process, Your Content has learned.

A spokesperson said retesting will begin in the next ‘couple months,’ and will be performed by an outside firm.

A former deputy who was charged with murder reportedly failed his exam before he was hired on to the Sheriff’s Office.