Teenage girl, 14, is denied life-saving arthritis medication in Arizona by Walgreens pharmacy days after state’s ban on abortion because it could potentially terminate a pregnancy – even though she is NOT pregnant
T 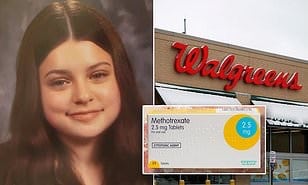 An Arizona Walgreens pharmacy delayed the refill of a teenage girl’s life-saving arthritis medication that can induce an abortion following the state’s termination ban – despite her not being pregnant, Your Content has learned.

Emma Thompson’s refill of her life-saving medication that she has taken since she was young was delayed by pharmacists because it can induce an abortion.

The 14-year-old resides in Arizona where abortions were all banned effective September 24 after a judge ruled in favor of the state’s 1864 prohibition.

Dr. Deborah Jane Power said she believed the Walgreens pharmacy didn’t administer the medication due to fear of being responsible of pregnancy loss.

Thompson has been ill all of her life and barely started to live her life again by returning back to school without the use of a wheelchair,‘according to FlipBoard.