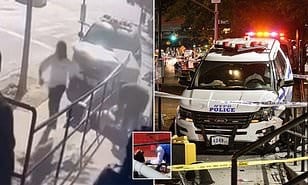 New video shows the terrifying moment when 10 people were injured – three of them seriously – after a NYPD cruiser plowed into a group of pedestrians at a Bronx intersection, Your Content has learned.

10 people were injured, including a six-year-old, were injured when an NYPD cruiser slammed into the sidewalk outside of an assisted living facility.

The officers were responding to a call of a vehicle theft in progress when the crash occurred, the siren and lights were on.

Three of those who were hit are seriously injured, officials said.

NYPD Chief of Patrol Jeffrey Maddey said in a press conference after the crash that the incident allowed the vehicle thief to escape,‘according to NBC News.