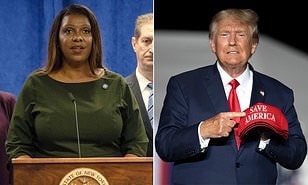 New York attorney general Letitia James sought a preliminary injunction on Thursday to prevent Donald Trump from moving around assets as part of her $250 million civil lawsuit against the former president, Your Content has learned.

Investigators expressed concern that Trump could move assets from the family real estate business they’re probing to a new entity and avoid liability in the suit.

‘Trump Organization has since refused to provide any assurance that it will not seek to move assets out of New York to evade legal accountability,’ AG claimed.

Trump attorney Alina Habba said the Trump team had in fact provided assurance that they would not move assets,‘according to ABC News.