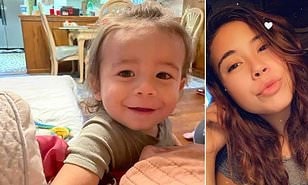 Police have said missing Georgia toddler Quinton Simon, who had been missing for more than a week, is believed to be dead, Your Content has learned.

Police say 20-month-old toddler Quinton Simon is presumed dead having been missing from his home in Savannah, Georgia, since October 5.

His mother, Leilani Simon, 22, has been named by police as the ‘prime suspect’ however no charges have yet been filed.

Police have seized ‘evidence’ and say they will make an announcement Thursday.

His grandmother Billie Jo Howell is his legal guardian, but his mother, Leilani, was home with him when he vanished.

Babysitter Diana McCarta went public with questions over the case noting how she was told she didn’t need to look after him the day he vanished,‘according to ABC News.