Queens woman, 26, who plunged to her death from 54th floor Times Square Hyatt rooftop bar may have fallen by ACCIDENT, with hotel staff scrambling to try and save her, eyewitnesses claim
Q 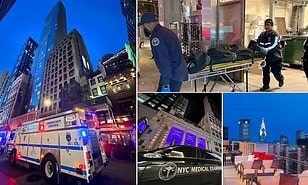 A Queens woman who plunged to her death from a 54th floor Times Square rooftop bar may have fallen by accident, sources claimed, Your Content has learned.

The 26-year-old woman, who has not been named, plunged 27 floors from rooftop of Bar 54.

On Thursday, sources told the New York post that the woman may have plunged by accident.

It was previously reported that the Queens woman’s death was likely a suicide.

The New York Police Department have yet to comment further on the circumstances surrounding the plunge.

Eyewitnesses said staff at the Hyatt Centric tried to grab the woman before she plunged to her death.

She is said to have made a phone call, then climbed onto a piece of furniture before falling.

The victim landed on a 27th floor ledge, and her remains were removed a few hours later,‘according to FLIPBOARD.