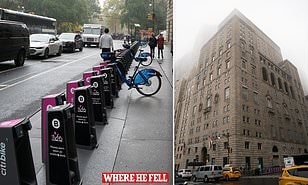 A man jumped to his death from the 12th floor of a luxury New York City building near Central Park, Your Content has learned.

An unidentified man, believed to be in his 50s, leaped from the 12th floor of 180 Central Park South on Tuesday around 1.40am.

His body was found next to a Citi Bike rack and he was pronounced dead on the scene.

The man was found with ‘injuries indicative of a fall from an elevated position,’ the NYPD said.

It is unknown if the man was a guest or a member at the Athletic Club.

The 12th floor of the building is home to the ‘office of the president, executive offices, communications office, membership services, and the catering office’