Four siblings – aged 3 to 14 – were shot dead by their stepfather before he killed their mother, set their Wisconsin apartment on fire and then turned the gun on himself
F 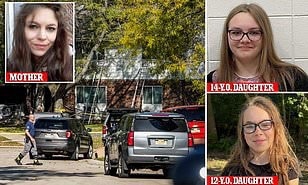 Four siblings and their mothers were shot dead inside their Wisconsin apartment after their stepfather set it on fire and then turned the gun on himself, Your Content has learned.

Jessica McKisick, 33, and her daughters Sofina and Natalie Kleemeir, 12 and 14, and two unidentified three-year-old boys, were shot and killed on Friday.

Connor McKisick – the father of the boys and stepfather of the girls – shot each of them before killing himself and setting the apartment on fire.

Their bodies were discovered early on Friday after firefighters were called to their burning apartment on Mansfield Court in Hartland around 5.15am.

Police said there was evidence of an ignitable liquid in the apartment where multiple guns were found.

It took 15 fire departments and nine police departments to put out the blaze and the other three families in the units have been displaced,‘according to FOX8.