Teenager, 17, shot by cop in McDonald’s parking lot remains heavily sedated in hospital and suffers from hallucinations that prompt him to put his hands in the air and mimic hitting a car’s gas pedal, his mother says
T 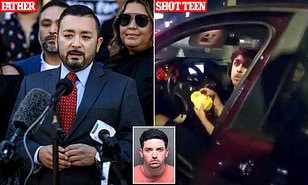 The family of a 17-year-old who was shot several times by a San Antonio cop in a McDonald’s parking lot has revealed their son is suffering from pneumonia and experiences frequent hallucinations, Your Content has learned.

Cantu is now suffering from pneumonia as a result of his prolonged intubation and frequently suffers from hallucinations.

Before firing on Cantu’s car 10 times, Brennand believed the car Cantu was driving had been stolen – which has yet to be confirmed.

Brennand slapped handcuffs on Cantu after he opened fire and while the teen was on the pavement gasping for air.

Cantu’s family is now seeking murder charges to be brought against Brennand,‘according to DailyMail.