Delphi suspect, 50, is charged in double homicide of teenage girls killed on a walk in 2017: Cops probe whether someone else was also involved in gruesome murders
D 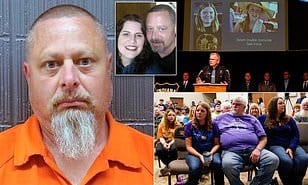 The man accused of murdering two teenagers out for a hike in 2017 has finally been charged with their deaths, Your Content has learned.

Richard Allen, 50, has long been presumed to be the unidentified man approaching Libby German, 14, and Abigail Williams, 13, in February 2017.

Libby had shared a snap of herself walking along the railroad tracks on the Manon high bridge in the woods outside Delphi, Indiana that day.

Snapchat updates made the case one of the United States’ most notorious unsolved murders after the girls’ bodies were found a half mile from the bridge.

Allen was arrested on Friday in connection with the murders and is now charged with two counts of homicide.

He has pleaded not guilty and is being held without bond,‘according to ABC News.