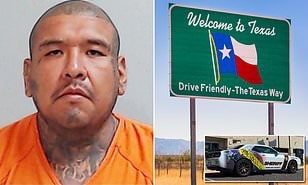 A mother who was home with her children when a burglar broke shot at the man, wounding him and forcing him to flee, Your Content has learned.

According to the Hidalgo Sheriff’s Office in southern Texas, a woman shot and wounded a would-be home invader on October 25

The woman, who was holed up in a bedroom with the children at the time, hit 36-year-old Carlos Garcia in the left arm, forcing him to flee.

She had told Garcia that she was armed and that the cops were on their way.

Shortly after their arrival, cops arrested Garcia in a nearby field and charged him with burglary.

The Hidalgo Sheriff said: ‘If someone’s breaking into your home you have the right to protect yourself and use deadly force‘,‘according to New York Post.