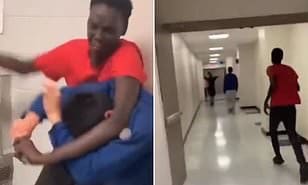 A violent brawl between two teenagers from upstate New York has been caught on camera showing a 17-year-old black student stabbing his 18-year-old Asian classmate in the hand and back before being stopped by teachers, Your Content has learned.

The violent brawl from upstate New York was caught on camera showing a black student, 17, stabbing his Asian classmate, 18, in the hand and back.

The vicious attack took place at Proctor High School Utica on Monday – was filmed by onlookers – and posted to social media.

The 18-year-old victim who suffered multiple stab wounds to his back and hands was taken to hospital with injuries not considered life threatening, police say.

The 17-year-old student has been charged with attempted assault and weapons possession and will answer his charges in Oneida County Family Court,‘according to New York Post.