Louisiana mayor, 84, is killed just hours before polls closed in reelection battle as RAM pick-up T-bones her SUV while she wasn’t wearing a seatbelt
L 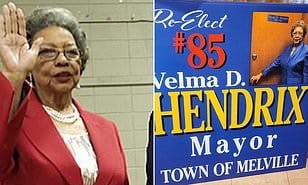 A Louisiana mayor running for re-election died in a car crash just hours before the polls closed on Election Day, Your Content has learned.

Mayor Velma Hendrix, 84, was killed in a two-vehicle wreck on a Louisiana highway at about 11am on Tuesday.

Hendrix was the mayor of Melville, a town of about 1,000 people in southern Louisiana.

Police said Hendrix was not wearing a seatbelt during the collision and died after being taken to the hospital.

State officials said because Hendrix died before polls closed, the election would remain open and other candidates would be given the opportunity to qualify,‘according to FLIPBOARD.