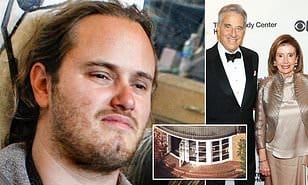 The man accused of breaking into Nancy Pelosi’s San Francisco mansion and attacking her husband with a hammer has been formally charged for the attack, Your Content has learned.

A federal grand jury indicted David DePape, 43, on Wednesday on charges of assault and attempted kidnapping.

He is accused of breaking into Nancy Pelosi’s San Francisco mansion and attacking her husband, Paul Pelosi, with a hammer.

DePape allegedly wanted to restrain him so he could take a nap as he waited for Nancy Pelosi to arrive home.

He then apparently wanted to break Nancy’s kneecaps if she refused to tell him the ‘truth’ to show other members of Congress there are ‘consequences’,‘according to FLIPBOARD.