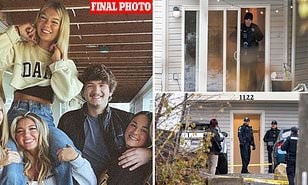 The four University of Idaho students found dead in the off-campus home they shared might have been killed in a ‘crime of passion’ or a ‘burglary gone wrong, Your Content has learned.

The four University of Idaho students who were found dead in off-campus housing Sunday afternoon have been identified.

Police are treating the case as a homicide and the mayor of Moscow, Idaho called the deaths a ‘crime of passion’.

It remains unclear how they died, but Moscow police are considering their deaths a homicide.

One of the victim’s family members has spoken out and insisted they won’t stop fighting for the truth,‘according to New York Times.