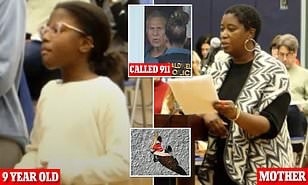 A black child in New Jersey had the police called on her by a white neighbor last month while she was spraying trees for lanternflies, Your Content has learned.

A black New Jersey girl who was spraying trees in her neighborhood for lanternflies had the cops called on her by a white neighbor.

Bobbi Wilson, 9, was outside in her neighborhood on October 22 when her neighbor, Gordon Lawshe, 71, called the police.

Lawshe said that he was scared of what she was doing and called the nine-year-old ‘a little black woman’ during the 911 call.

Bobbi’s mom, Monique Joseph, said during a city council meeting that she did not want to label anyone but rather just bring it to the town’s awareness.

The mother said that she believes while it may have been unintentional, it was still an act of racism,‘according to PEOPLE.