‘I can’t see it being fun for me now’: Soccer fans are ‘devastated’ after Qatar BANS stadium alcohol sales at the World Cup, as American beer Budweiser says the restrictions are ‘beyond our control’
& 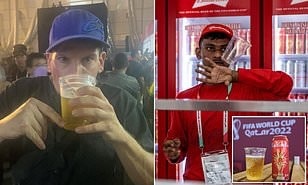 Soccer fans reacted with a mix of anger and resignation to Qatar’s ban on alcohol inside World Cup stadiums, Your Content has learned.

The move is reportedly down to increasing pressure from the Qatari royal family.

Soccer fans who traveled to Qatar said they were ‘devastated’ at the news.