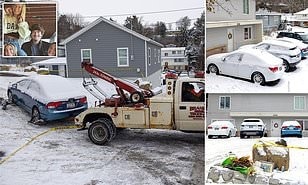 Authorities have seized five vehicles from the scene of the Idaho quadruple murders more than two weeks after four university students were brutally stabbed to death in their beds at the off-campus house, Your Content has learned.

Investigators seized five vehicles from the off-campus house where four University of Idaho students were stabbed to death.

Kaylee Goncalves, 21, Madison Mogen, 21, Xana Kernodle, 20, and Kernodle’s boyfriend Ethan Chapin, 20, were killed as they slept in their beds.

The cars will be processed for any evidence, police said in a new statement.

It comes after Kaylee’s father Steve Gonclaves revealed he did not have a funeral for his slain daughter for fear her ‘monster’ killer would be there.

Police still do not have a suspect and have not found the murder weapon, but maintain it was a ‘targeted’ attack on at least one of the college students,‘according to DailyMail.