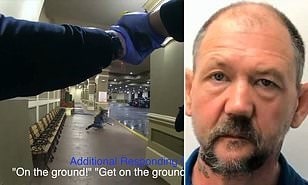 A man shot by police in Nevada for wielding a knife was wanted across the country in connection to a missing man, Your Content has learned.

Marcus Lee Lewis was shot multiple times by Reno officers in the parking area of Silver Legacy Casino on December 4 after he failed to put down his knife.

Lewis was seen in bodycam photos fleeing from police and ignoring their order to stand down before they shot him multiple times before he entered the casino.

Investigators later discovered that Lewis was wanted in connection to a missing Virginia man he was last seen with in September,‘according to FLIPBOARD.