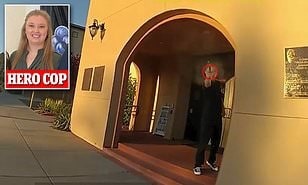 California prosecutors have released shocking bodycam footage of the moment a police officer was shot twice before his heroic partner shot the gunman in the head and killed him, Your Content has learned.

Milward and his partner, Abigail Fox, were responding to a call from a woman who was allegedly being stalked by Tran.

After speaking to Tran, Milward turns his back, and the suspect immediately pulls out a gun and fires at the officer, striking him twice.

Milward falls to the ground after a bullet pierces his armor, and Fox quickly shoots the gunman dead and rushes to her partner’s side.

The Orange County District Attorney’s Office found ‘no evidence of criminal culpability’ against Fox and said the shooting of the gunman was justified,‘according to Police1.