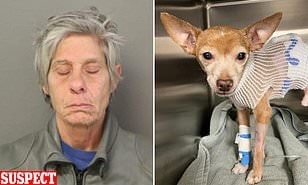 A Chicago woman approached a 15-year-old girl walking her dog in her Chicago neighborhood and stabbed her pet Chihuahua repeatedly in an unprovoked attack, Your Content has learned.

The teen was walking her dog when Olivo struck up a conversation with her.

The suspect followed the young girl then stabbed the dog several times.

Olivo was arrested and charged with aggravated cruelty to animals and aggravated assault with a deadly weapon.

She is scheduled to appear in court on January 4 at 9am,‘according to Mirror.