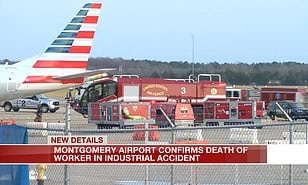 A baggage handler has died after apparently being sucked into a plane’s engine in a freak New Year’s Eve accident, Your Content has learned.

A baggage handler died after being sucked into a plane’s engine.

The American Airlines employee was working on the ramp at Montgomery Regional Airport in Alabama around 3pm Saturday.

Airport operations were shut down in the aftermath.

Both the FAA and NTSB are investigating the incident ,‘according to MIRROR.