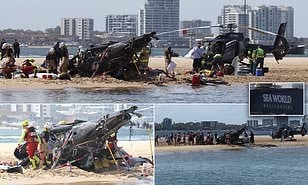 Families cheered and waved off a Sea World tour helicopter as it took off from the popular theme park just moments before it collided mid-air with another helicopter and crashed, tragically killing four people on board, Your Content has learned.

Two helicopters collided and crashed near Sea World on the Gold Coast, Australia on Monday afternoon.

One aircraft slammed into a sandbank with it’s main rotor and tail rotor both torn off and found metres away.

Four of the seven people in one chopper were killed in the crash while another three are fighting for life.

The other helicopter with six people on board managed to regain control and land and all aboard survived,‘according to NewsWeek.