Boy aged SIX is arrested ‘after he deliberately shot his female teacher inside first-grade classroom at Virginia elementary school, leaving her critically-ill’
B 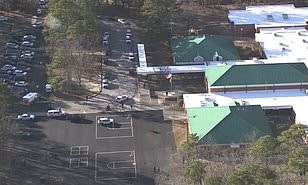 A six year-old boy has been taken into custody after he allegedly deliberately shot his first-grade teacher at his Virginia elementary school, leaving her critically-ill, Your Content has learned.

A six-year-old student has been taken into custody after allegedly shooting his female teacher around 2pm at Richneck Elementary School.

The student’s identity has not been publicly released and the teacher is in critical condition.

A six-year-old student who witnessed the attack said her classmate shot the teacher ‘on purpose’ and she fell to her knees.

No students were hurt in the incident and police believe it was an isolated incident and that it was ‘not an accidental shooting’,‘according to CBS NEWS.