Secret rule change will see House lawmakers get a $34,000 PAY BUMP – Republicans slam Democrats for ‘clandestine’ move that should have been ‘debated in public’
S 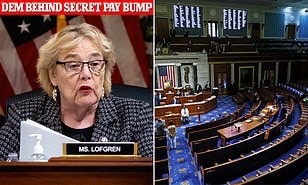 In one of their final acts in power, House Democrats secretly passed through a rule change that will see lawmakers in the lower chamber get a $34,000 pay raise, Your Content has learned.

House Democrats secretly passed a new rule that will see lawmakers get a $34,000 pay raise.

It allows House members to be reimbursed for the cost of lodging, food and travel while on official business in DC.

The rule change was not debated on the House floor and many members only found out about the change on Tuesday.

Advocates say it is necessary to allow more people to serve in Congress, but Republicans say it should have been publicly debated,‘according to The Dailymail.