WASHINGTON (Reuters) – Black-clad activists among hundreds of demonstrators protesting Donald Trump’s swearing-in on Friday clashed with police a few blocks from the White House, in an outburst of violence rare for an inauguration.

At least 217 people were arrested in the melees, police said.

The burst of civil disorder followed a fierce presidential campaign that ended in a stunning victory for Republican Trump over Democrat Hillary Clinton on Nov. 8 and left the country divided.

Many of Trump’s supporters traveled to Washington to cheer their new president on Inauguration Day. Tens of thousands of detractors are expected to march peacefully on Saturday.

In the violence, knots of activists in black clothes and masks threw rocks and bottles at officers wearing riot gear, who responded with volleys of tear gas and stun grenades as a helicopter hovered low overhead.

At one flash point, a protester hurled an object through the passenger window of a police van, which sped away in reverse as demonstrators cheered. Earlier, activists used chunks of pavement and baseball bats to shatter the windows of a Bank of America branch and a McDonald’s outlet, all symbols of American capitalism.

Multiple vehicles were set on fire, including a black limousine. A knot of people dragged garbage cans into a street a few blocks from the White House and set them ablaze, later throwing a red cap bearing Trump’s “Make America Great Again” campaign slogan into the flames.

Police said six officers were injured in scuffles with protesters. The people arrested would be held overnight before making court appearances on Saturday, Peter Newsham, interim chief of the Metropolitan Police Department, told a news conference. Newsham added that police would continue to monitor security around the night’s celebrations.

Friday’s protests played out just blocks from Pennsylvania Avenue, where New York businessman-turned-Republican politician Trump took part in the traditional parade a newly sworn in president takes from the U.S. Capitol to the White House.

The various protest groups scattered around the city chanted anti-Trump slogans and carried signs with slogans including “Trump is not president” and “Make Racists Afraid Again.”

“Trump is not going to be stopped at the top, he’s going to be stopped from the bottom, from people rising up,” said Ben Allen, a 69-year-old retired teacher from San Francisco. “We support the right of everybody in this country, no matter what nationality, what religion, the color of their skin, to be respected as a human being, and this guy doesn’t respect anybody.”

Trump supporter Ryan Shiring, 21, stood nervously with a group of friends near a pile of smoldering trash cans.

“We thought there would be protests but we didn’t expect violence,” said Shiring, a college student from Hartford, Connecticut. “We were hoping for a completely peaceful transfer of power.”

The U.S. Secret Service, Washington police and other law enforcement agencies had about 28,000 officers in place to secure a roughly three-square-mile (7.8 square km) of the city.

Trump, a former reality TV star, angered many liberal Americans during his stunningly successful campaign with demeaning comments on women and immigrants. His inauguration speech was a populist and nationalist rallying cry.

Protesters and police said the violent activists were acting independently of organized opposition to Trump.

The Disrupt J20 group on Twitter said its anger was not directed only at Trump, and that it would also have demonstrated had Democrat Hillary Clinton won the election last November.

Not far from the White House, Bob Hrifko, a member of the Bikers for Trump group, said he was struck in the face with an aluminum chair when he tried to intervene in a scuffle involving police and protesters.

“We need more order. This ain’t right,” said Hrifko, who was bleeding from a cut under his eye.

The number of people who turned out for the midday swearing-in ceremony in the rain appeared to be significantly smaller than the estimated 2 million who attended Democrat Barack Obama’s first inauguration in 2009. Overhead video of the National Mall showed sections of the white matting laid down to protect the grass were largely empty.

Sympathy protests were held around the nation and the world, in cities including Los Angeles, Tokyo and London. But in Moscow, Russians hoping Trump will usher in a new era of detente with their country celebrated his inauguration.

In Washington, David Guthrie, a long-haired, bearded, 36-year-old from South Bend, Indiana, stood stark naked on a street corner with an obscenity and “Trump” written on his buttocks in black magic marker.

As he stood, he was pepper sprayed by police, but stood with his eyes clenched, saying he wanted to prompt “a national conversation on the illegitimacy of the Trump presidency.”

“I need a shower,” he said, as fellow protesters helped him walk away, wrapped in a silver blanket. 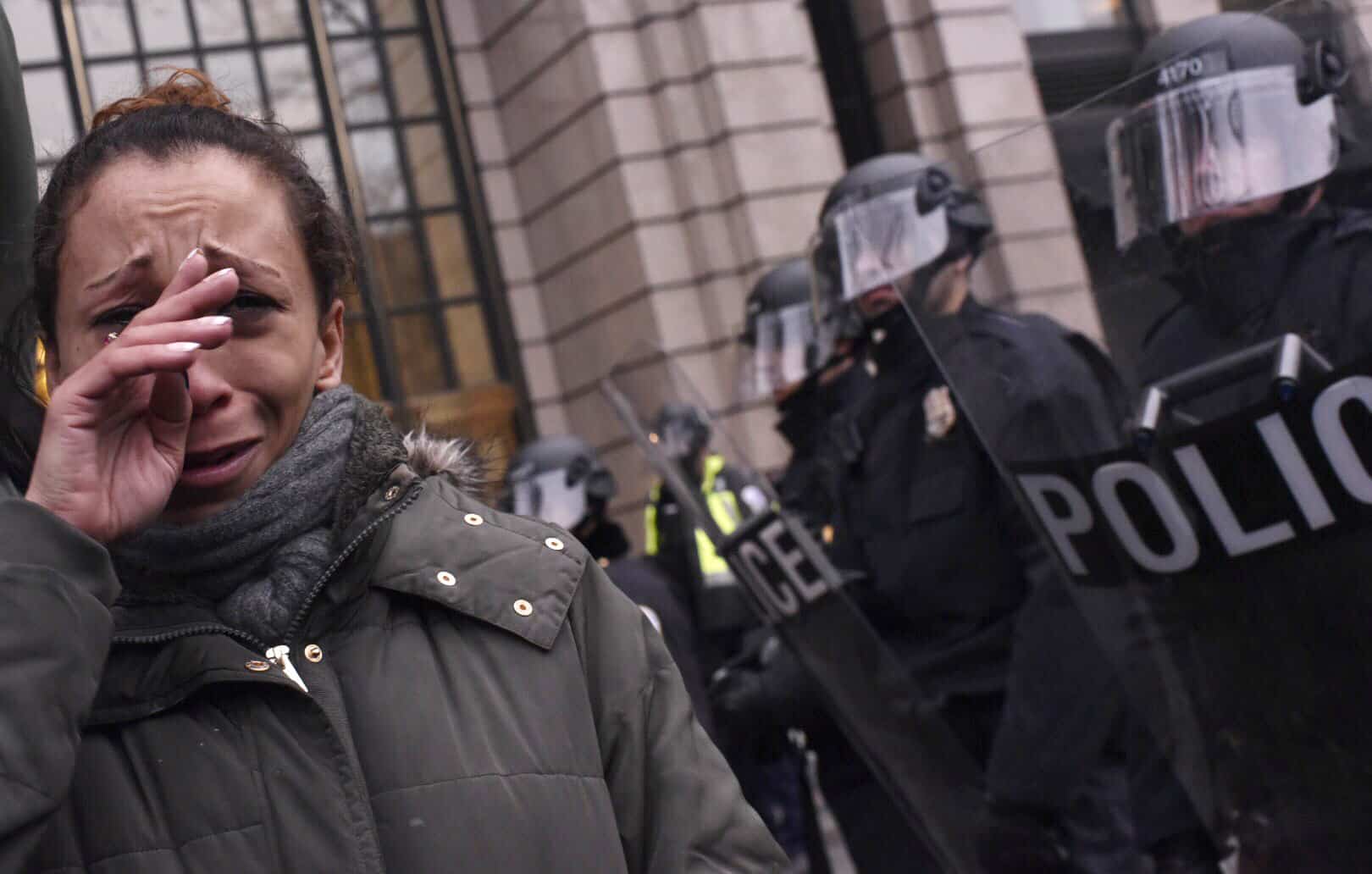