The students traveled from Alabama’s Briarwood Christian School. White House aides directed the students to the bottom of the stairs off the East Room hallway. 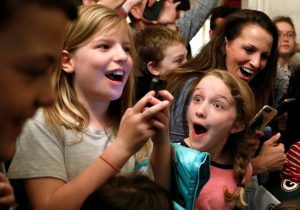 President Trump gave the students an unexpected addition to the visit as he emerged for a surprise appearance to personally welcome the students to the White House.

Trump waved to the group and Jack Cornish, 10, of Birmingham, Ala, approached the President to give him a hug as the crowd cheered.

“Work hard, everybody, work hard,” he said, standing in front of a portrait of former first lady Hillary Clinton.

Several people in the crowd Tuesday told the press pool that they made the request in December from their congressional offices, but they didn’t find out until last week that they got tickets.